I miss blogging. I miss you guys. I’ve been so busy. I hope to come back to the blog soon but in the meantime, here are some pictures of Jang Hyuk for Westwood, Spring 2015 collection 🙂 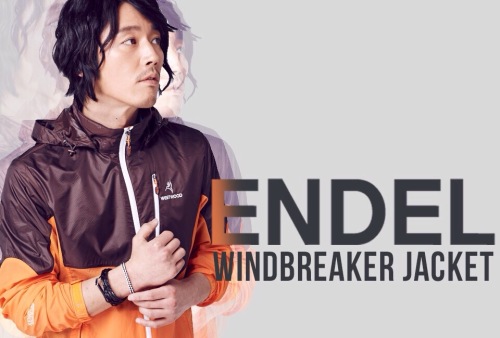 Gumi and I have been really busy with work and studies lately, so we haven’t blogged much. Sorry friends! I’ll try to post more often. I have so many ideas and our love for Hyuk is as strong as ever! but life, you know?

In order to start “buying” your forgiveness :p here are brand new pics of Hyukie at a Fan signing event that happened just a few hours ago! Our Gumi was there and Hyukie smiled at her! I’m not sure if she still remembers why lolol but I hope she can answer my question soon, when she recovers 🙂 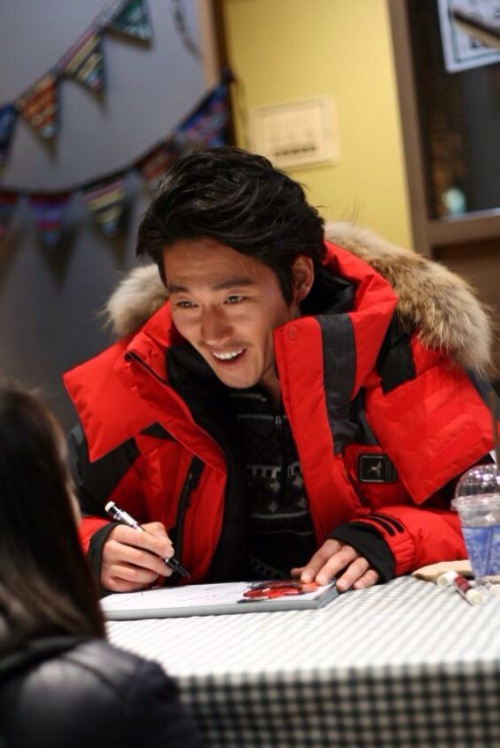 What did you tell him Gumi? 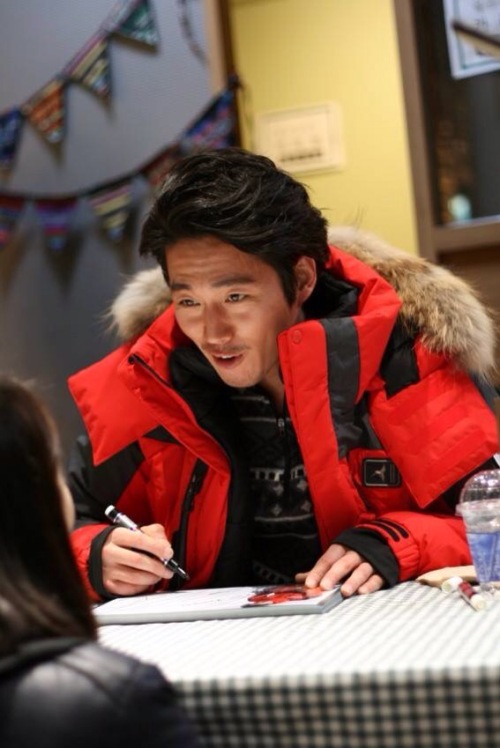 He has a mischievous smile!

Drama Fan forced me to write how I made him smile, right now at this moment, and the fact that it is 3am here did not stop her from forcing me. Not that I was gonna sleep anyways. Hyukie’s beauty is haunting me.

Anyways, what did I say to make him smile? Let me make this clear first, it was all meticulously designed deliberate plan on my side! (pat on my head) I was so determined to say something to him, preferably something amusing, and make sure I stare into his eyes, cuz that’s what I failed to do in summer 2013 autograph event. I wanted to make my getting autograph something slightly more than a brief encounter that lasts as long as he signs his name and writes a short message “Be happy!”, so I decided I will ask him to write me a customized message so that I’ll have more personalized encounter&be able to say something to him&stare at him for a longer while as he writes the longer message.

So when I was standing in line I was trying to come up with a message that could flatter and/or amuse him, and simulated myself saying it over and over so that I would actually be able to say it without freezing.

And it was my turn, I walked up, immediately squatted down, so that I’d be able to have a better stare at his face and eyes. This was a great decision, cuz when another fan was taking pics, I wasn’t blocking him, hence we got a great pic of him smiling…!

When he started signing his name, I asked, “Oppa, can I ask you to write me a message?” and he looked up and oh our eyes met jeez the beauty..when I looked into your eyes…i had no idea you’d be my wife…(feat. Jeff Bernat FTLY ost)

I said “Can you write, ‘Study for as long as the time you spend staring at my face, and get all A’s!'”

And he had that shy and amused smile, and of course it is our Hyukie, he would do what his fan asks him to do, but he hesitated for a sec before writing the sentence, and that shy hesitation was super adorable. And he started writing the message, but omitted ‘my’, and my wild guess is that he felt shy to write the phrase ‘staring at my face’. But I didn’t let him go, I caught him and said “Can you add ‘my’ right here oppa?” and he did lol.

And he stopped writing and went like alay…? with a puzzled look on his face. He didn’t get ‘all A’s’ part. So I drew A in the air with my finger and said A, as in grade. And he went like oh…! all A’s! and smiled. I assume that’s when those pics were taken. But might as well not be, cuz I don’t remember actually seeing his face (again, duh, Gumi, when will you ever remember seeing his face…?!?), so those smiles might as well have been from different moment. But the important thing is that he smiled at me *swoooon* -End of Gumi’s Story

This is is face when he received the precious clay dolls his fans gave him for his birthday. 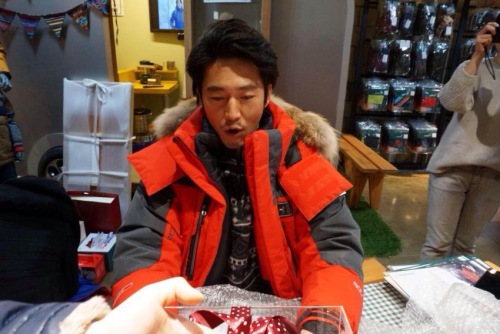 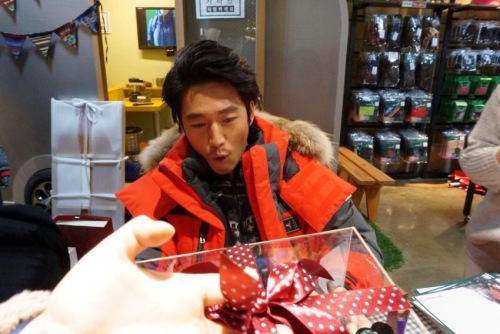 Here are some awesome close ups! Can you imagine seeing him this close and not fainting? I can’t!

He is looking at me! *faints* 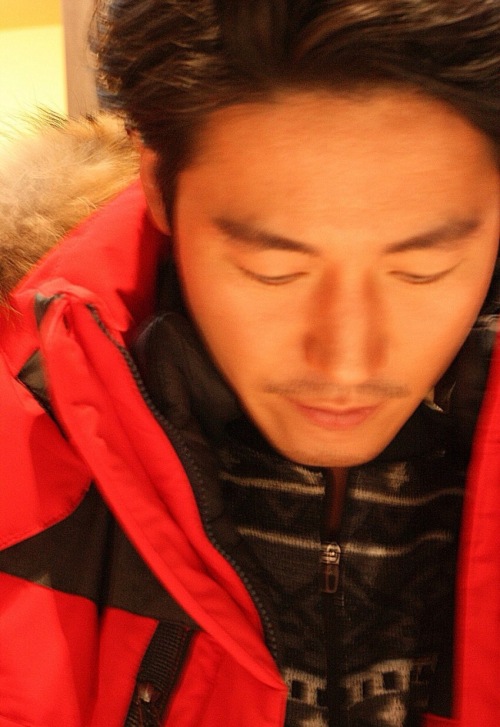 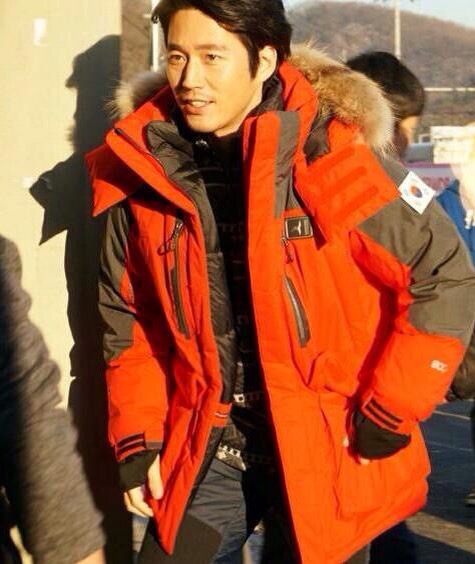 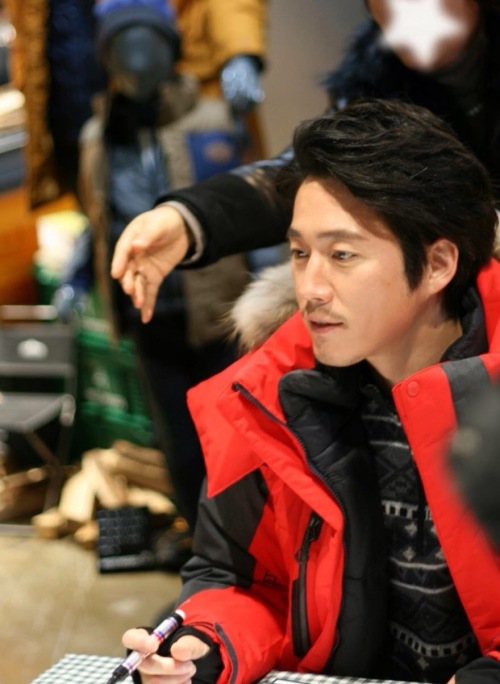 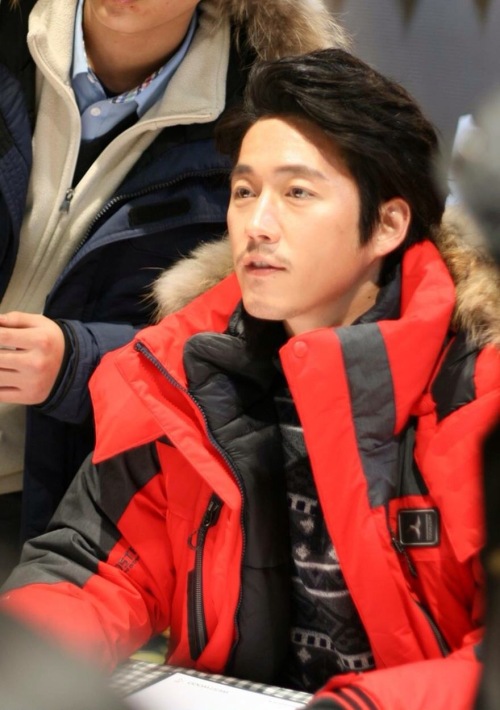 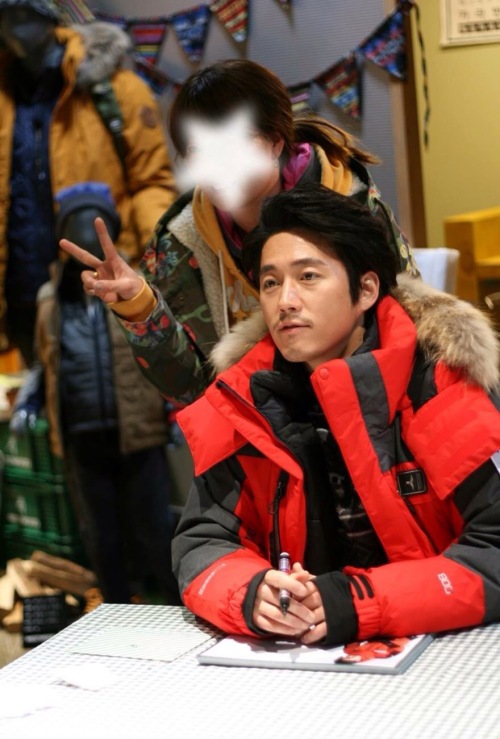 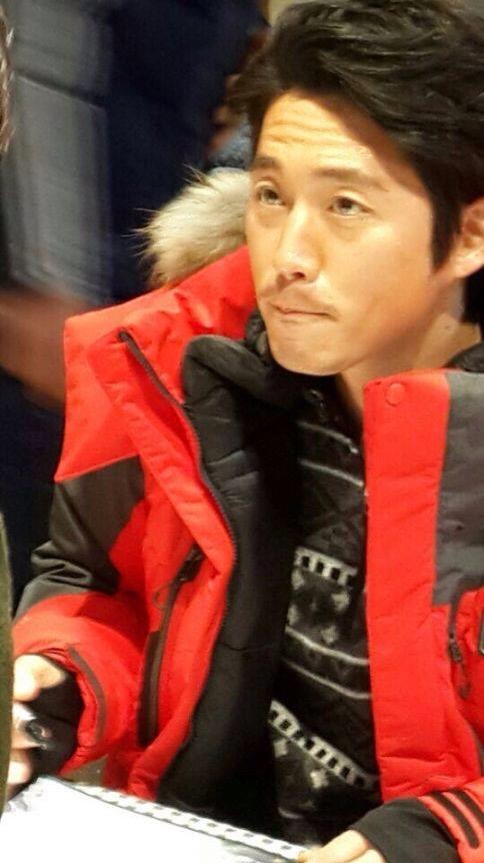 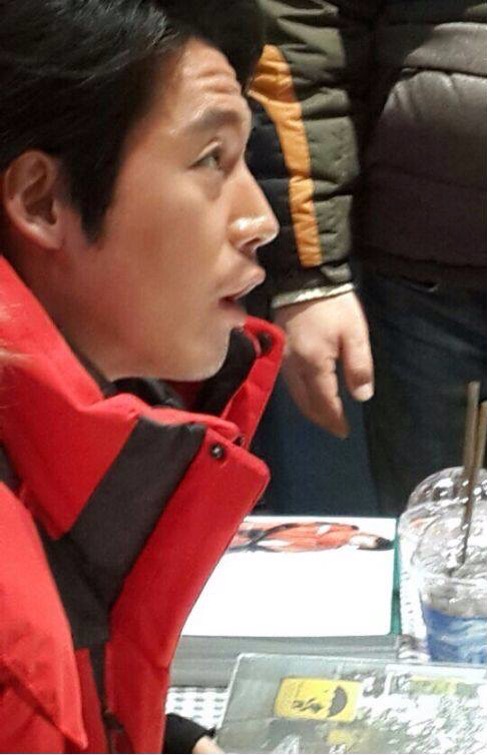 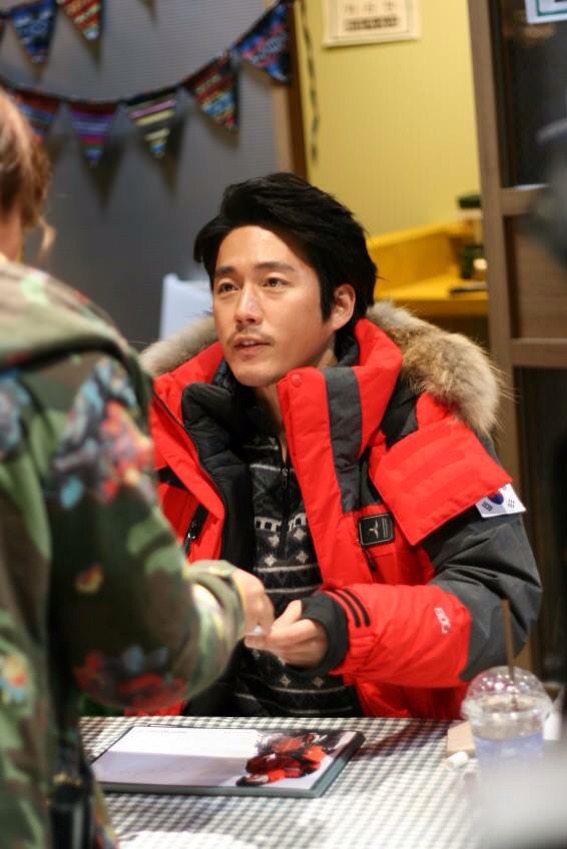 These are dedicated to Zhaoul. This is her favorite color and jacket 🙂

Respectful bowing after the shooting of the commercial ended 🙂

Our Gumi loved this one, so this is for her

Westwood – 2014 Spring Summer Collection – CFs, posters and Behind the scenes 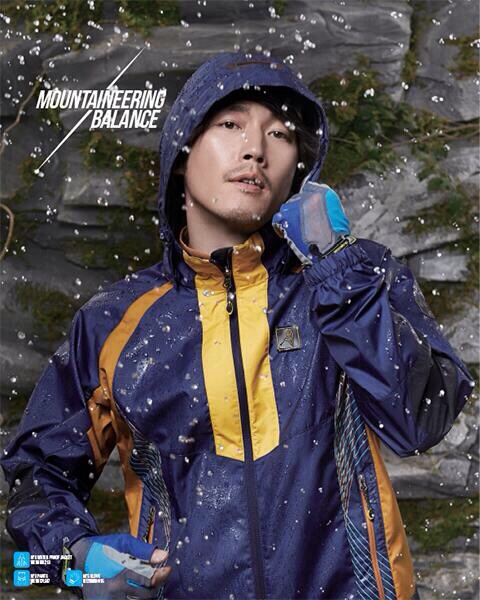 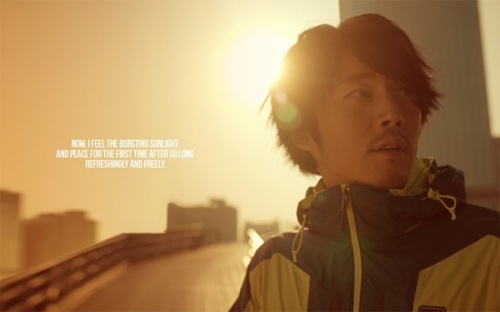 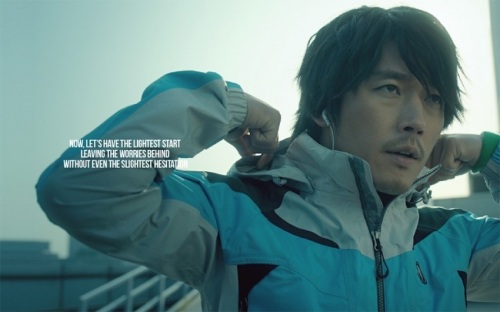 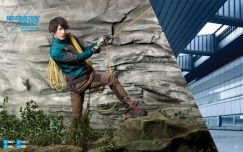 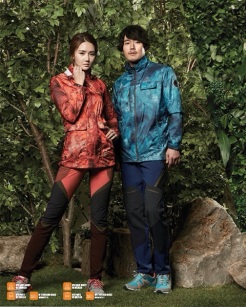 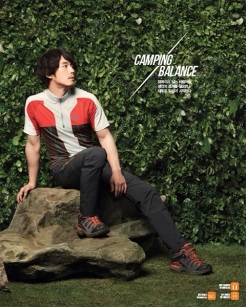 Click on the link below to see six different versions of the CF. The third one is my favorite.

You can also see some awesome Making of Film / BTS  video which I just found out! I’m spazzing over Jang Hyuk’s sweet smiles behind the cameras. He really seems like such a mellow sweet guy behind the badass front! And at the end of the Making of Video where he bows repetaeadly awwww, so respectful and shy, I find that very cute.

So yes there was a fan autograph event held by Westwood on Dec 7th Saturday, from 3pm to 4pm. It was first come first served, for 100 people. Last time they did autograph event, they didn’t really publicize it so it was like a random surprise event, but this time they actually did pub it beforehand so fans could go and see him. 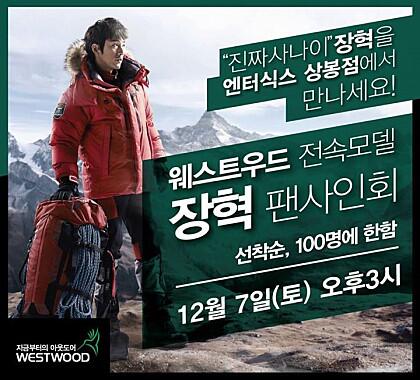 But Westwood also decided to be super lazy this time. Last time, they took photos and broadcasted it live on their twitter, but this time there was no photo to be seen! Gahh! So the only photo we have right now is this one..one super duper nice person who ought to be blessed just for this, has uploaded this picture on twitter, also commenting that he was really good looking.

And that’s really the only photo I could find. Sorry, guys. But I do have some random small stories to share. Some of my friends went to the event, so although we don’t have photos, I’ll try to share every single possible details.

They were actually surprised that there were a lot of male fans in the line waiting. See, our Jang Hyuk is popular among men, I knew that from before 😛

And of course, he has beautiful eyes. We all know that, but that’s also what every one comments on again when they see JH in person for the first time. This time, too, my friend was repeatedly commenting again and again that he had such pretty eyes, his eyes were really the only thing she could see at the moment, those eyes were really big, bright brown colored, perfectly shaped, looked so innocent, and were just really really beautiful. And she claimed that all the cameras suck cuz they don’t really capture the beauty of Jang Hyuk, that he is so much prettier in person than in cameras. Especially today, she claims that he was so much more beautiful and pretty and adorable and cute and everything than he appears to be on the photo above.

Another friend commented that he was shorter than she thought (lol :P), had smaller face than she thought, had bigger eyes than she thought. And he looked pretty, soft, and gentle. Oh and also that he did look super natural, looked like he didn’t do anything to his hair. lol. Way to dress up for fans, huh? But honestly, he looks good even when he rolls directly out of bed, so let’s forgive him.

She actually had a plan for today’s event. She bought TJ album, just for the purpose of embarrassing JH. LOL. If there’s any one of you who don’t know about TJ, it’s this guy over here.

It’s the name he used when he released an album as a rapper in 2000. He had blond hair, and was rapping, and was crawling on the ground…lol. People use it to make fun of JH now, cuz it’s so different from current serious Jang Hyuk we know, and every time you bring up TJ, Jang Hyuk shows this really cute adorable embarrassed responses, so it’s kinda fun to tease him with that 😛 You can search TJ-Hey Girl on youtube whenever you are feeling down, it might be able to make you laugh lol.

Anyways, so she bought TJ album, and when it was her turn to get an autograph, she handed over the album to him.

Fan: Oppa, can you sign this? (hands over the TJ album)

JH: Oh, yeah…..(chuckles) (tries desperately to hold laughter back by biting his lips)

Fan: Oppa, when is the 2nd album coming out?

lol way to be reminded of the past he wants to erase. But actually, TJ wasn’t that bad. It was pretty popular back then. It was just….different……..LOL

Fan:(takes out both TJ album and The Client DVD)Uh…can you sign this…? (hesitates to choose one of those two)

Fan: TJ was cool. (trying hard to hold back laughter but is failing)

JH: TJ….(obviously trying to hold back his laughter, his lips are trembling)

JH: No….not really…(can’t continue with his words cuz he is trying so hard to hold his laughter back)

Aww I just find it soooo freakin adorable when he is embarrassed by this TJ thing….! It’s good that we got at least one thing we can tease him for. Cuz he’s so perfect.

One of them asked him if he was purposefully letting his hair grow, and he said yes, he was letting it grow for his next project.

I’m not gonna complain about his hair any more, cuz you know what? That’s for his next project!! Our Jang Hyuk is gonna keep working busy next year! He’s not gonna let us be sad abandoned fans, he’s gonna provide us with some new joy and happiness! Yay!!

And you know what’s more? First, be prepared to hear this, your heart might not be able to take this….

He said that he miiight be doing a movie and a drama at the same time again.

Whaaaaaaaaaattt?? Hyukah, can you repeat that again please??? Seriously? A movie or a drama is already enough to put me up in the heaven, but a movie AND a drama?? Whooaaah, this guy, he’s not gonna let me go! He’s so gonna fully occupy my 2014!!

But then again, you can’t really be sure of anything until they have been finalized. So yup no being super duper hyper. Nope. Better not be too elated cuz then u might get disappointed. But it does surely look like he has something in mind as of now, so hopefully we can see some news in near future. I have no clue what movie or what drama, and I might start worrying about whether that’s the right choice etc, but as of now I’m just really happy that we’ll be able to see actor Jang Hyuk pretty soon. He surely is a workaholic! Never need to worry about him not working!