I still had a couple of skits to cover and thanks to Jay Park fans! we have them together in this video, and what is even better, with english subs. Jay Park participated in the Chuno parody (which we already covered), the Volcano High parody, or what could also be called “The battle of the badass nerds” and my favorite of his “The self defense class for females” in which I believe Jay, provided the humor and Hyukie, the cuteness 😀

MORE GIFS OF JAY PARK GETTING ABUSED  BY JANG HYUK

So for those of you who might not know this, Jay and Hyuk are very good friends. They both belong to the same agency and have collaborated before.

PHOTOSHOOT FOR VOGUE: Here they are rocking some serious guy-liner and scrumptious choco-abs for Vogue. Yummy! 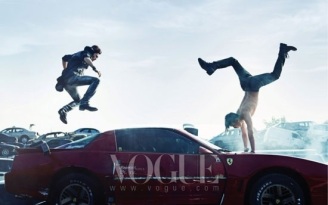 BTS OF THE SAME PHOTOSHOOT

SNL Parody Chuno or the Do you wanna see food? skit

SUMMARY: This is a parody of the heartbreaking and (yeah, kinda gross) scene from Chuno, in which Daegil cries while eating, imagining he is having a meal with his “dead” friends.

This skit was as funny as it was disgusting and that is why I didn’t want to make too many captures or gifs of it. I believe Jang Hyuk’s expression on the gif below tells it all! (he has some nerve though! it’s not like he hasn’t done more than one scene like this before. I remember one in Tazza where he stuffed his mouth with sushi rolls and cried. He looked like he was going to choke lol) The skit features idol Jay Park, who is also Jang Hyuk’s friend and who made appearances in the skits that we will be posting next.

SUMMARY: Jang Hyuk said he wasn’t going to be like other hosts who use SNL to promote their current projects, and then immediately started coughing 😀 Then, he said that in 17 years of career he has been acting non-stop and he has only been an actor, just an actor, but a ghost from his past came to remind him, that he once tried to be a rapper. That’s right! TJ himself showed up and forced Jang Hyuk to face his “dark” past lol! 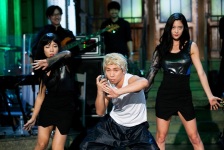 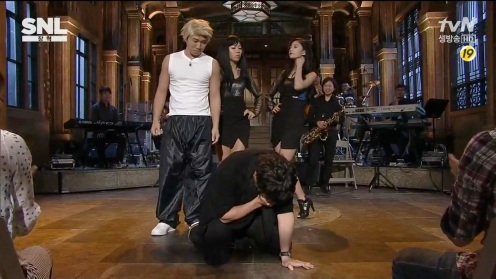 END_OF_DOCUMENT_TOKEN_TO_BE_REPLACED

In this SNL skit, we see the filming of an action scene with Jang Hyuk. This skit portrays Jang Hyuk as an action actor, who gives a lot of input during action scenes, almost directs them (not far from reality) and acts as a mentor to new actors. This time, the rookie, gets so “into it” that his “improvisation” becomes painful for the main actor lol! Jang Hyuk is very patient, but not a saint, so by the end we see him screaming “Why doesn’t he die already?!!!” or something along those lines 😀

END_OF_DOCUMENT_TOKEN_TO_BE_REPLACED

SNL Korea Parody : I’m Sorry I love you (or any korean drama)

This is Gumi’s favorite skit. It is titled “I’m sorry, I love you” but it is unrelated to So Ji Sub’s classic korean drama. However, it does seem to be a parody of korean dramas in general.

SUMMARY:
A jobless guy played by Jang Hyuk is on a date with his girlfriend. While eating, he learns that his girlfriend’s parents are asking her to date a doctor. He realizes she is not good for her so pulls all sort of stunts to force her to dump him. But every once in a while, he can’t hide his true emotions and turns around to cry miserably, much to the horror of the other costumers. The girl refuses to leave him, proving that her love is unbeatable! Except when he falls and hurts his back (and we assume other things) She decides, he is not good for her anymore 😀 (cold hearted woman) 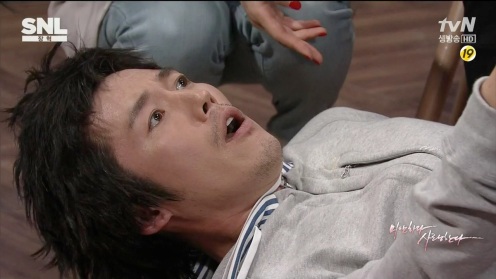