Dear Show: I hope I’m Fated to Love You

Of course I’m Fated to love this drama. It’s a drama starring Jang Hyuk! Yaaaayyy!!! right? Well, actually, no. It doesn’t work like that.

How I wish things were as simple for me. Yes, Jang Hyuk’s presence in this drama guarantees that I am “fated to check it out” and “fated to try to love it” but unfortunately, as much in love as I may be with an actor’s talent, this does not guarantee I will love all his dramas or movies. And I will be honest, when I first read this drama’s synopsis, I panicked. Since then, my expectations have been going up and down as in a roller coaster but I’ve finally settled on a”let’s be hopeful” mode. And there are plenty of reasons to be hopeful.

So first, there was panic because of this synopsis (This is the original drama synopsis but I switched the names to the koran version’s characters. However, since this is an adaptation. the korean synopsis will probably change)

A really unfashionable working class girl Kim Mi-Young has the desire to tie down her handsome boyfriend to be with her. (Her nickname is post it girl, because her co workers are always sticking post its on her desk and even her body, with errands she has to do for them. Her personality is defined as, having no personality eek!). Due to certain reasons, her boyfriend gets her to go on a love cruise and she started to ponder on how to lose her virginity and tie down her boyfriend. Mi-Young ended up taking cold medicine which made her drowsy and went into Lee Gun’s room. Lee Gun is the sole male heir (here we go again!) to his family’s company and has been in love with his girlfriend, Nam Se-Ra, for a long time. He planned to propose to Se-Ra on the boat but she didn’t turn up on the cruise. An island owner added drugs into Lee Gun’s drink and he became disorientated and returned to his own room. Mi-Young and Lee Gun end up having a one night stand. Mi-Young later finds out that she’s pregnant and Lee Gun’s  grandmother forces them to get married. Will a couple forced to marry for the sake of their unborn child find love with each other?

How dated does this sound? How overdone? how backwards? This is not a premise that excites me at all. First, because it is, in my opinion, far fetched and typical. Their encounter might not be too typical, but their character descriptions is. Second, I have extreme allergy to jerk chabeols and passive heroines. That combination is lethal to me. I can tolerate a genius jerk and a naive female lead, if the genius is too brilliant to ignore (Dr House and Cameron dynamic, to give you an example), I can tolerate immature jerk chabeol, if heroine is the kind that puts him in his place. I can definitely tolerate and even ADORE anti heroic leads (Jang Hyuk has played many of those), if there is something special about them or if they evolve nicely. But the jerk who is a jerk just because its the norm in korean drama and “women like bad guys and good guys are boring” mentality makes me yawn.

BUT, there are reasons why I think I will be able to enjoy this drama despite the premise and plot. I haven’t watched the original taiwanese version but I read a manhua based on it, which includes all the major plot points so I now have an idea of what to expect:

1.- Romance – I haven’t seen many romance centric dramas and I don’t feel particularly attracted to the rom com genre. I love romance! but I prefer it mixed in with other genres I watch, like crime mystery, sci fi, etc. Yeah I’m one of those annoying viewers that tend to ship couples that are not even meant to be together lol! Maybe it’s because the “forbidden fruit”, “unrequited love” and “impossible love” romances are the ones that excite me the most in fiction. Also, because I prefer characters that have a life and purpose besides “romantic love”. But, the fact that those stories are not centered in the romance, means, the romantic storyline might never be resolved or it might get dropped, which leads to frustration. So, every once in a while, it’s good to go for a story where the main point is the romance, and satisfy that craving.

2.- Forget logic, surprising twists and realism, welcome predictability – This is not an apparent “positive” aspect, but hear me out. Don’t you feel like giving your brain  a break sometimes? Just watching a story that you can totally predict but still look forward to because you love the characters? A story that will be all about feelings? I do. Fated to love is such a story. It is familiar, and comfy, predictable and silly with lots of heart. I think we might not even need subs to get it 😀

3.- The Jangs chemistry – Those who watched Successful Story of a Bright Girl know Jang Hyuk and Jang Nara had great chemistry. Their chemistry made us forget logic. We did not give a damn about the horrible wardrobe, exagerated situations, etc Now they are both much more experienced actors. I fully trust they will be as good, or even better together, than they were in the past. This kind of story relies heavily on chemistry and I have faith on The Jangs. They had the cuteness and the angst, now let’s add some adult sexual tension and voila!

Yes, my boyfriend is a dork!

But I adore him 🙂

4.- Cliches – These are a double edge sword. We say we hate them, but once in a while, we crave and welcome them right? Yeah, I admit it. I do love some cliches. Fated to Love You has most of textbook cliches. Hero feeling disturbed as he realizes he is in love. Feverish hero, heroine nursing him (I love this one, I really do). Drunken love confessions. Love stares under the rain. Couple getting stranded some place and being surprised by love/lust/feelings for the “wrong” person. Main couple banter etc.

5.- Great cast – Jang Hyuk, Jang Nara are our leads. As we know, Jang Hyuk is versatile and can do romance, comedy, and sexiness very very well and in varying degrees (Bright Girl, Thank you, Robbers, Five Senses of Eros, Thorn OMG Thorn!) Jang Nara was already very cute in Bright Girl, and I have not seen her in anything else but I hear she was excellent on School 2013. I don’t know the second leads Choi Jin Huk or Wang Ji Won but I hear good things.

6.- Jang Hyuk in rom com – I have said it before and I’ll say it again. I love his talent, but more than that I love his passion for acting, his almost obsessive dedication to his craft. Jang Hyuk could’ve stayed comfortably cultivating the image that people associate with him, mostly: – The badass action hero with a heart of gold – but he refuses. He is an actor who aims at being complete, who aims at always pushing the envelope. This is a typical role, but for him, it is atypical. It is a challenge. There are some people already questioning his ability in this genre (I assume most of those people have not seen his early dramas and movies. To me, his ability to do varied genres is obvious, because I’ve watched all his works, but I understand not everyone has done this, not even all of his fans) To me, even within his most popular badass role (Daegil in Chuno), he showed comedic ability and beautiful vulnerability I know Jang Hyuk will rise to the occasion and prove many nay sayers wrong. Of course, how the character is portrayed, depends also on the writers and director’s vision. But I have 100% confidence that Jang Hyuk will try his best at giving this character his own spin and making him interesting.

7.- Main leads character growth – I won’t spoil but I will say that, at least on the manhua, both leads do evolve. Maybe not in the most unpredictable or smooth way, but they do. I welcomed her evolution more because to me she is the one who needed to change the most. She starts out as an emotionally dependent, frustrating victim, but she gets to find her own strength. He does behave like a jerk, and on this point opinions will differ, but from what I read, he reveals his heart early on. He was surprisingly, less irritating than I suspected. He is flawed but has many redeeming qualities.

So yes! I’m hopeful guys! I can’t wait for this to start! The premiere date is slated for July 2nd. As of this moment, Jang Hyuk has not started filming. Jang Nara and Choi Jin Hyuk have started.

HERE ARE SOME IMAGES FROM THE SET: 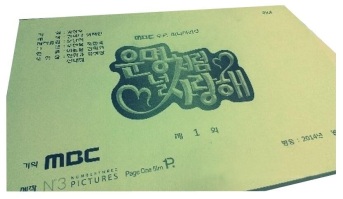 Script and title of the drama

SNL Parody Chuno or the Do you wanna see food? skit

SUMMARY: This is a parody of the heartbreaking and (yeah, kinda gross) scene from Chuno, in which Daegil cries while eating, imagining he is having a meal with his “dead” friends.

This skit was as funny as it was disgusting and that is why I didn’t want to make too many captures or gifs of it. I believe Jang Hyuk’s expression on the gif below tells it all! (he has some nerve though! it’s not like he hasn’t done more than one scene like this before. I remember one in Tazza where he stuffed his mouth with sushi rolls and cried. He looked like he was going to choke lol) The skit features idol Jay Park, who is also Jang Hyuk’s friend and who made appearances in the skits that we will be posting next.

SUMMARY: Jang Hyuk said he wasn’t going to be like other hosts who use SNL to promote their current projects, and then immediately started coughing 😀 Then, he said that in 17 years of career he has been acting non-stop and he has only been an actor, just an actor, but a ghost from his past came to remind him, that he once tried to be a rapper. That’s right! TJ himself showed up and forced Jang Hyuk to face his “dark” past lol! 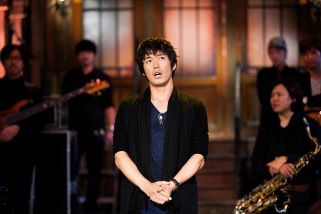 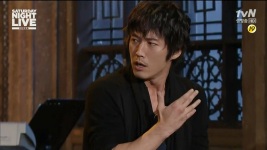 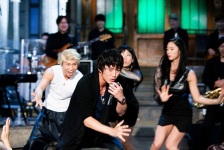