Another great Chuno review by kjtamuser from the Amusings blog

Review. Chuno is a sweeping drama that weaves timeless issues throughout – friendship, love, loyalty, human dignity, good versus evil, during a time where slaves were crucial to life but considered the lowest rung of society. Slaves ran away from cruel conditions and Slave Hunters were employed to bring them back. 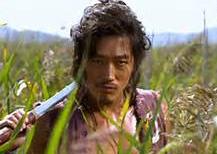 Dae-gil is haunted by his first love, former slave, Un-nyun (Lee Da-hae), who escaped with her brother 10 years ago when Dae-gil’s family home was burned to the ground, to which Dae-gil was the lone survivor.

Song Tae-ha (Oh Ji-ho) crosses paths with Dae-gil multiple times during the series and is a key to Dae-gil’s first love, Un-nyun, story. Tae-ha is a military general for…