I recently joined a group on Facebook dedicated to the drama Chuno. If you are an avid user of Facebook and a fan of Chuno, I highly recommend it. This group will keep you updated on news about Chuno’s cast, such as Oh ji Ho, Lee Da Hae, and obviously our Jang Hyuk but more importantly, they keep the love for this wonderful drama alive! Yes! In that little haven, Chuno lives forever so you can indulge in your obsession for all eternity lol! No, but seriously, the main reason to join, is that this group of fans, is a seriously cool bunch 😉 Our Lady G is a member so, that says it all, right? JOIN HERE NOW

As a little present for our new friends I wanted to post this quotes that Gumi translated for us. These are quotes from Chuno’s writer, the director and KBS Drama President about Jang Hyuk and his role in creating Daegil. It gives us some insight as to what contributed to make Chuno, so special. A wonderful committed actor, and the creatives who recognize talent, embrace it and let it shine.

Chuno script with notes from Jang Hyuk (can he be more nerdy? ;))

At the beginning, there was a point. A point and another point meet to form a line. The line meets another line and form a plane, and another plane, and another. Daegil was a line in my head and became a plane on the script. Jang Hyuk made Daegil three dimensional. No, he did more than that!

Sounds like the highest complement you can give as a writer. Can you give an example?

There was certain moments I felt Jang Hyuk was a real good actor. This actor Jang Hyuk, changed the feeling or order of wording on the script. The most heart piercing lines in “Chuno” all went through Jang Hyuk’s revision. There was a line “I will live with you forever” and Jang Hyuk switched it to “I will live forever..with you”. Jang Hyuk didn’t “act” Daegil, he became Daegil. 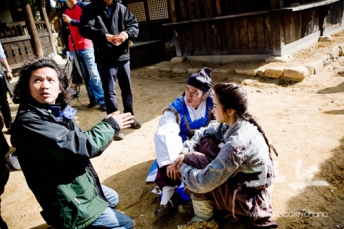 After the casting, when we had the first meeting, he (Jang Hyuk) already had all the lines memorized. We were trying to do pre filming so there were already 8 episodes of script out, and he memorized them all. That is the first time he surprised me. And as the filming went on,Jang Hyuk was pondering about every scene at every moment, even more than the director, to the point of almost embarrassing the director. He pondered not only about the character of Daegil but about the overall flow, and what kind of emotion Daegil should carry at that particular point of the overall flow.

There is a saying “You get crazy, only if you are crazy”. In Chuno, the one who got crazy because he is crazy was Jang Hyuk. Compliments can make a whale dance, and it can make an actor “crazy”. Attracted by the writer’s script and the director’s picture audience started sending compliments and Jang Hyuk started dancing like a killer whale and his eyes started revealing crazy passion. Seeing Jang Hyuk acting now, we can all feel that he is crazy for his slave hunter Daegil.

Like Loading...
This entry was posted in Chuno - The Slave Hunters (2010), Everybody Loves JH and tagged Chun Sung, Chuno, Daegil, Jang Hyuk, Kwak Jung-Hwan, The Slave Hunters. Bookmark the permalink.