Robbers – Once I get in, I don’t want to get out – Spazz Recap

I’m going crazyyyyy (pulling my hairs, kdrama style). Remember I had started rewatching Robbers, doing captures and gifs? but then, August 2013 happened, and Jang Hyuk super busy schedule didn’t allow Gumi and I to breathe. We were posting posting posting all the news. Later, Real Men and other things got in the way of my Robbers. I got so distracted that I even considered, rewatching Thank You first, and resume Robbers later. I was so determined to do this, that I even lend my Robbers DVD’s to a friend (who coincidentally just finished watching Thank You) and of course, not having my DVD’s with me is making me crave Robbers like crazy!

So! I found a draft of a post that I had started before! It’s a sort of recap. I highlight this scene because it has some of my favorite and most romantic dialogues from Oh-Joon. This scene is on Ep 9 and for those who have not watched the series  BEWARE OF SPOILERS BELOW 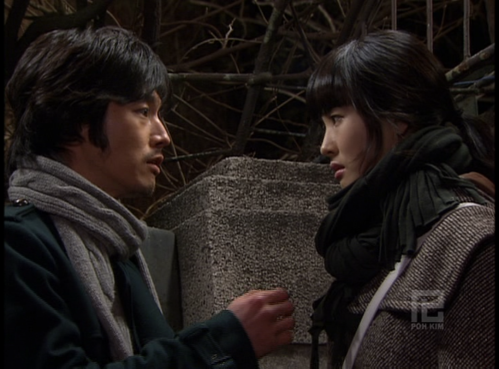 Oh-Joon comes to Dal-Rae’s door to bring her his daily report (He is on a mission to apologize to every woman he conned, in order to get Dal-Lae’s forgiveness). She doesn’t want it. He first sounds shameless, demanding that she gives him a chance, insisting that while he lied to her at the beginning, later on his intentions were sincere.

If you borrow these gifs, we will appreciate it if you credit to our blog. Thank you 😌

Understandably, she doesn’t accept this. He keeps insisting “I know I was a bastard but how can you deny someone’s true intentions”?He sounds like he wants to guilt her into giving him a chance. But soon his demands turn into a pitiful plea.  Oh Joon tells Dal-Rae that he would kneel in front of her if his knees didn’t hurt so bad, from kneeling the whole day. He tells her that he has gotten beatings from the husband’s of the women he has been apologizing to (ever the manipulator ;)).

Suddenly he says the words that make me understand him completely. This is when I realized that he really didn’t have a choice but to continue and that he really needed Dal-Rae’s chance

“My life is hanging on this. I don’t want to go back to the way I was before. If you abandon me, I really won’t have courage anymore”.

She is acknowledging this. You can see it in her eyes, but she keeps her strong stance. She insists that this is none of her business and that she is going to pretend he never existed in her life. He asked whether this will be possible. She finally asks frustrated “What do you want to say?” and he says the phrase that melts my heart.

“If I can live everyday is because my heart wants to get close to you. I want to see you. I really miss you. Your laughter, your tears. Your tantrums, and your warm hands. And every time I hear, ‘Mr Oh-Joon be careful on the road’. Your farewell. Every and every day, I think of it all day”. 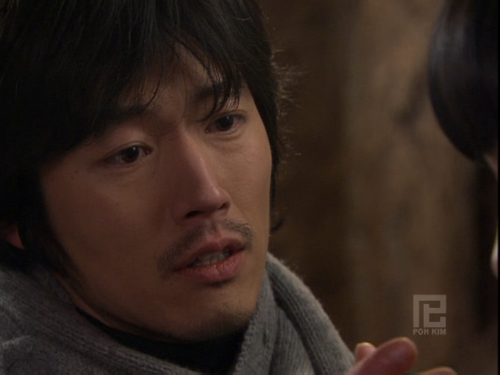 This is what the subtitles say. However I hear him repeating Dal-Rae ssi after every sentence, so I think he is saying something like “I want to see Ms Dal-Rae. I miss Ms Dal-Rae’s tantrums and warm hands”, which makes him sound even more romantic and sexy. I just lurrrve how he says”Dal-Rae ssi”. It’s not just about the dialogues but the sincerity in which those words are expressed. Jang Hyuk’s interpretation, his voice breaking at the perfect moments, it’s all perfect and yet, natural. Lee Da-Hae’s response is also marvelous. 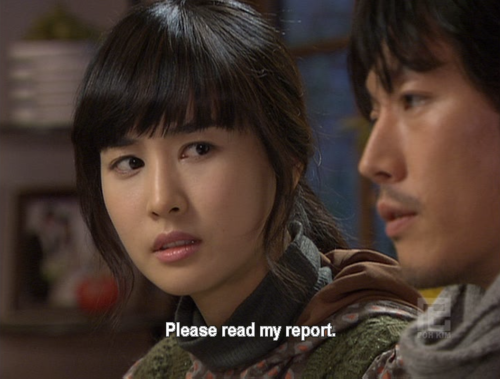 I also love the scene that follows. Dal-Rae’s mother in law doesn’t know they separated so she invites him to come inside for some tea. Oh-Joon takes advantage of the situation bargaining with Dal-Rae. If she doesn’t read his report, he will tell everything to “auntie”.

Then he looks at her with these “Puss in boots” expression and says :

It is because of scenes like this that I feel that Robbers is a gem. An underrated precious drama. Yes, it has a lot of flaws but it has so many qualities too. Look at these dialogues and look at these performances. Oh Joon’s succession of “begging” scenes has been the best I’ve seen in anything. You can definitely feel his regret, and his absolute need to be forgiven. It is a matter of life or death for him. And how wonderful it is that we also understand Dal-Rae? because she has reasons to not trust him, and still you can feel she cares, she pities him and she loves him. Usually, the receiving end of the apology tends to frustrate us if they don’t cave. But it is not the case with Dal-Rae. I say it again, Lee Da-Hae was wonderful in this role and particularly, in these scenes.

This series shows Jang Hyuk’s “perfection” as a romantic lead and it reminds us that the chemistry between the lead actors can take a love story to the next level.

My spazzing will continue, so stay tuned 🙂

THE SCENE ON VIDEO: This is not the same subtitle I have on my DVD’s. I will try to upload my version when I get them back from my friend